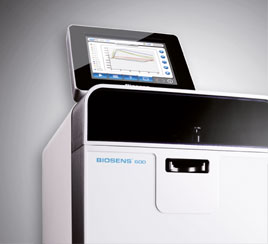 Revolutionizing the fight
against drugs in traffic

The key feature of BIOSENS® equipment is the rapid analysis time and easy operation, making it possible to screen significantly more drivers. The method is hygienic and involves less violation of personal integrity.

Drug testing – as easy as alcohol testing
An oral fluid sample can be taken through the window without the driver leaving the vehicle. The BIOSENS® Oral Collector is wiped over the drivers tongue and the officer inserts the sample in the BIOSENS equipment. Within a minute the result is presented. This type of rapid response is a requirement for effective traffic control.

Another study, carried out in France, showed that approximately 40% of all young drivers who died in traffic accidents were under the influence of drugs. Statistics from the American National Institute of Drug Abuse show that 16% of drivers during weekends and evenings are under the influence of drugs. Of those involved in traffic accidents, 34% had been affected by drugs.